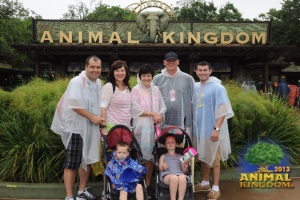 Day three we headed to Animal Kingdom. It was the first visit to this park for all of us except Jake, this was the Disney park he had spent a college semester working at twelve years ago. He has great memories of that time and wanted to share those with all of us. This day began with rain but we wore our Disney ponchos and didn’t let it stop us. After all we were Okies and totally understood what “true” bad weather can be. We did The Kilimanjaro Safari, The Dinosaur (twice)

, Expedition Everest (really scary) and totally loved The Lion King live performance. I heard my son in-law, Roy, say Lion King was one of his favorites so far. Kinsey and Colton were chosen (their bubba planned this, he knew where to have them seated) to be a part of this musical extravaganza and performed proudly. 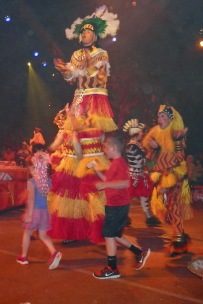 Animal Kingdom was the location of our lunch reservation.    All thirteen of us met at Tusker House

Minnie was also present, along with Donald and Daisy, and Goofy. 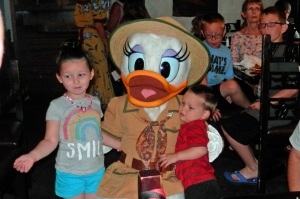 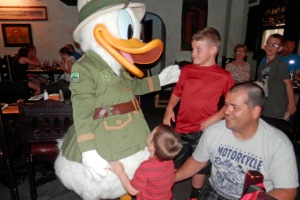 All four of the grands paraded with these special characters, they each were given the African version of a maraca which they shook as they followed Goofy. The food was tasty; I think the best of all the restaurants we tried. Daisy flirted with several of our young men, favoring Roy and Tyler with a kiss. 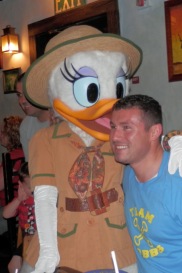 This was a fun character meal, great for families.

Later we happened upon the Animal Kingdom parade, a lively happy time; some of us went to see Tough To Be A Bug, a fun sit-down in AC break. Animal Kingdom is home to Winnie the Pooh and Tigger’s character spot. Colton, Kinsey, Grace and Gabriel were each lucky enough to have great photo sessions with Pooh and the bouncing Tigger. 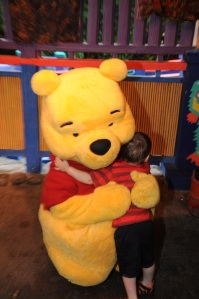 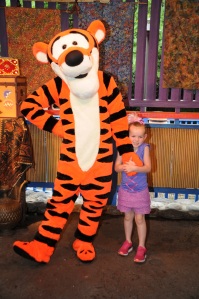 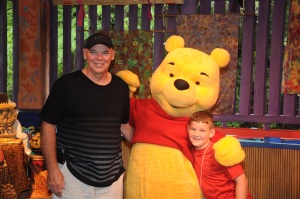 Sadly, Grace’s photo session and most of Gabriel’s with Tigger and Pooh was lost.  We accumulated more than 700 photos during our stay and we learned after we were home that there was about a ten minute window that Disney’s PhotoPass transmitting system was down.  The entire family enjoyed Animal Kingdom, we will definitely visit it again one day.
The same day (day three) we gave Courtney and Roy the evening off to enjoy alone. Mike and I got to spend time with Colton and Kinsey and the four of us headed to Magic Kingdom. 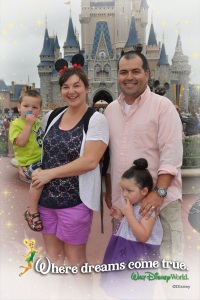 They loved the Speedway, even waited in line two times to drive the cars. We all rode Buzz Lightyear, shooting at the “Z’s”‘, Colton was the high score winner of course.

Dumbo was a must, It’s A Small World can’t be missed, and no trip to Disney is complete without The Haunted Mansion. Kinsey was a little apprehensive about the haunts but Grandad assured her it was a “cute scary”. Not far into the mansion Kinsey asked, “what part of this is cute?”
Mike and Charity and their little ones met us later. We all loved the parks at night, it was cooler and the lines were a lot shorter. After our group grew to eight we rode The Little Mermaid and then found Tales With Belle, Charity had read about this and knew it would be a great experience for our four little ones. Charity and her Mike had very successfully done their research before our trip trying to be as prepared as possible and make vacationing with a 2 and 3 year old memorable and fun. Each one was given a role in the play, Colton was the Beast (he is such a handsome leading man) 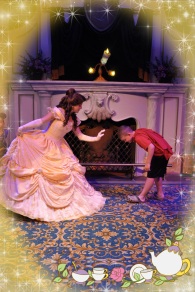 , Grace was the horse (she loved it)

, Gabriel was the teacup (never will you find a cuter teacup) 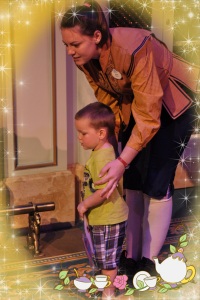 , and Kinsey was given the last role chosen, the closet (all who knew Kinsey were thankful she was not left out, and she was an excellent closet) 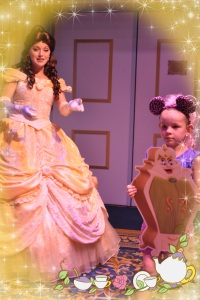 . We set in a beautiful castle inspired room and thoroughly enjoyed the play, with such a cast it had to be great.

There were other characters in the play; we only had eyes for our four. Charity, Mike, Grace and Gabriel had fast passes to Peter Pan so we separated and watched the wonderful display of fireworks with Colton and Kinsey.

Disney’s fireworks are a nightly event and can’t be missed. We closed the park, as we did almost every evening.
The bus ride home that night was kind of special, I got to have both my princesses sit with me, and they are both a little bit Nana’s girls, which I totally love. Of course, they both have Grandad under their spell. Little Gabriel fell asleep shortly after the wheels began turning. Gabriel is very much a Grandad’s boy but I know he loves me too and I adore him. Colton belongs to both of us, maybe when you are ten you start to understand diplomacy. He is a fine young man and we aren’t sure what made the world spin before our Colton came along.
That night Colton and Kinsey slept in our room. Earlier in our evening they had mentioned they hadn’t got to check out the big Jacuzzi tub in their room so of course each one tried our tub. It was around 2:30 a.m. before our heads touched our pillows, but they were happy and contented heads.

I have been married to my bestfriend for 38 years. I am blessed to be surrounded by my family: two daughters and a son. I have five grandchildren who light up my life.
View all posts by Judy →
This entry was posted in Vacation and tagged Charity, Colton, Courtney, Disney World, Eric, Family vacations, Gabriel, Grace, Jake, Kinsey, Mike, Roy, Tyler. Bookmark the permalink.